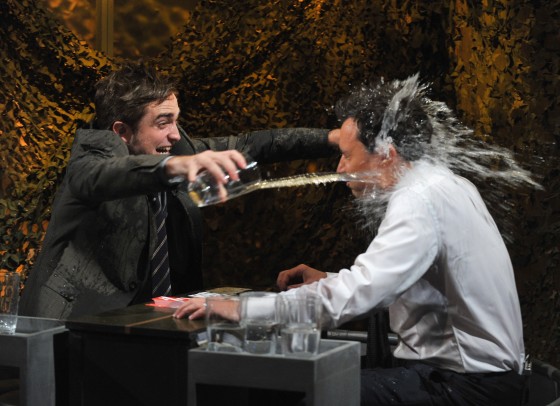 I’m so glad New York City promotion for The “Twilight” Saga’s final installment, “Breaking Dawn Part 2” was a success! And by a success I mean Twihards got some GREAT, hilarious bites from Robert Pattinson during his rounds of talk shows to promote the film.

On Thursday, Robbie had a full day of press planned starting the day with The Today Show then Live! With Kelly and Michael and ending his day at Late Night with Jimmy Fallon. While on Today, just like Kristen Stewart, he asked about the status of his relationship with cheating leading lady, Stewart. In true awkward and random fashion Robbie turned the tables on Today host Savannah Guthrie and answered, “I want to ask, because we get asked it all the time. Who is actually asking? Is it in your contract?” Nice comeback!

But the true laughs came from Rob’s appearance on Late Night. Fallon and Pattinson played a game of ‘water war‘ where both Rob and Jimmy were drenched in water. Rob REALLY enjoyed himself. Another one of my favorite moments is his reaction to himself in tight leather pants in the second part of his interview with Fallon, very sexy!

“Breaking Dawn Part 2” is in theaters, finally, next week on Friday, November 16.